The Asian side, or Anatolia as locals would call it, seems to be filled with mystery and misconceptions for the vast majority of international investors. Some view it as a home for the poor, while others view it as a bad investment that will never grow in price. Yet the reality is actually completely different.

Uskudar is the district that the vast majority of tourists will know. Known for the world famous Maiden’s tower, Uskudar provides many with the most instagrammable of photos. Uskudar is a large district and home to many premium neighborhoods.

Salacak is the most commonly visited of all Uskudar neighborhoods. It is where the “Meydan” is located. The Meydan is home to the many historic mosques and ancient monuments, the most well known being the Mihrimah Sultan mosque. It is also host to two major metro stations - Marmaray and M5. Most famously the Marmaray’s next stop is the historic old city at Sirkeci. Uskudar is also host to a busy pier, with ferries to Besiktas, Kabatas, and the Golden horn line.

With such an incredible history, Salacak is difficult to find new property - what old property remains is in desperate need of upgrade.

These regions are the most desirable of Uskudar. Both only have low rise property - most commonly 3-4 stories. Acibadem has one exception, with the outstanding Akasya complex and mall. Acibadem is host to the headquarters of the famous Acibadem brand of private hospitals as well as its biggest branch. The world famous Emaar brand has its largest complex just after Acibadem, in Libadiye.

Cenelkoy is a historic neighborhood which lines the Bosphorous. It is best known for its “Cinar” tree, an old tree which is meticulously preserved. However, some neighbourhoods of Cengelkoy are undergoing heavy regeneration, and decent brand new and off plan options are available at value-for-money prices.

Beykoz is an elite and historic district of Istanbul that lines the Bosphorus. Many Ottoman era castles remain, and Byzantine structures such as Yousef's hill remain, and open to tourism. One of Istanbul's most sought after regions, construction is strictly controlled by the Bosphorus planning committee. Only a few areas remain open to construction, with space quickly running out.

Areas of Beykoz like Kavacik are sought after, not only for its breathtaking nature and Ottoman mansions, but due to the easy access to central Istanbul via the FSM bridge. The business district ends up being just 10-15 minutes away, and one can even take a ferry to work.

At the Bosphorus coast, Beykoz comes to life, with popular historic town centres such as Cengelkoy. The coastal route is lined with posh restaurants and cafes, coming to life at night.

Kadikoy can be considered as historic as Uskudar. With its piers on the Bosphorous, the ferries have crossed the Bosphorous for centuries, from Kadikoy to Eminonu and Karakoy. The Haydarpasa train terminus can be considered one of the finest examples of German gothic architecture, as it was the last stop for trains from all parts of Asia and beyond. Like Uskudar, Kadikoy has many neighbourhoods, and is a vast district that spans the Marmara sea towards Bostanci.

Fikirtepe is a neighbourhood that has undergone heavy regeneration. Having started nearly 10 years ago, it seems another ten years are required to complete. The government took the entire neighbourhood en masse, and combined parcels of land to form large islands of land. These were then tendered and high rise permits were issued. Today, Fikirtepe has over 20 projects, both recently completed and under construction. The area is well served by the metrobus and the M4 metro. Most notably, the Marmara medical university is on the border as is the Medeniyet university - two large university that house thousands of students. The recently rejuvenated Goztepe state hospital is also within, and these factors are driving heavy rental demand in the area.

Many tourists will know Baghdad Avenue as being Istanbul’s second premium Avenue after Abdi Ipekci (Nisantasi). These four neighborhoods line the premium part of the Avenue, and has undergone heavy renewal. The vast majority of this renewal was made on a like-for-like basis, with individuals brokering deals with builders for wholesale renewal of their buildings.

Kozyatagi lines the E5 and his home to many private hospitals. Kozyatagi also enjoys excellent transport links with the M4 metro, and easy access to the E5 and the FSM bridge. The influence of West Atasehir, which is already filled with 30-40 storey high rises, ensures a few compounds of similar height has cropped up to meet overspill demand.

The destiny of these two districts are intertwined - only separated by the E6 highway (TEM). East and West Atasehir (technically Barbaros and Ataturk neighbourhoods) are two of the most desirable neighborhoods of Istanbul for middle class, white collar families. Both neighborhoods saw heavy and planned construction throughout the early 2000s and 2010s. Filled with compounds, the region is most famous for the second tallest building of Istanbul (Metropol business centre and mall). It is well known amongst locals as having the highest density of private hospitals and colleges anywhere in Istanbul.

Umraniye has benefited from the growth of Atasehir, and since the Istanbul Financial District was moved to Atasehir, large scale compounds have cropped up in Umraniye. Umraniye demographically is largely working class, as opposed to Atasehir which is almost exclusively white collar middle class.

Both districts are sandwiched between the E5 highway and the Marmara sea coast. Traditionally, the coastal route housed those on high incomes, with factories and warehouses lining the E5. With the construction of the M4 metro line, things changed very quickly. The government designated those old warehouses as “city centre” zones, and quickly gave permits for 40-50 storey high rises. Today, these regions house multiple large malls as well as an Ikea. 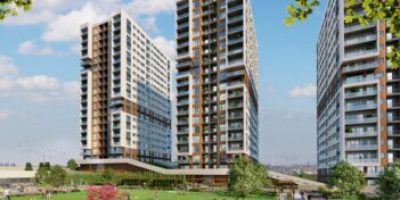 Europe and Asia meet at this huge complex in Kagithane