Kagithane is a primarily residential district of Istanbul, within a short drive of Istanbul's primary business district in Levent. Real estate price rises have averaged 180% since 2012 according to Pera's statistician Mert. Experts are in agreement that this impressive rise will continue for the next 5 years.

Kagithane is a large district, yet investment primarily rests around the Hasdal junction of the E6 highway, and the Cendere river - for very specific reasons. Growth is expected to continue, with private and public investment running into the billions of Lira over the last few years.

Financial and banking authorities are all in these locations, and with Istanbul's ever increasing traffic issue, easy access to the office is crucial in the mind of the typical white collar Turk. Kagithane serves this purpose, as a primarily modern residential district.

The government has already committed over 500 million Euros into a major rail line - the M7 metro. This metro line is a crucial infrastructure, and was a key pledge by Istanbul's mayor in the last elections. It officially completed in 2020.

Running from Mahmutbey in the west, to Besiktas on the shores of the Bosphorus, this is a construction of epic size.

Proximity to this metro line is of crucial importance to Turks when choosing their home - realistically, most people would prefer car free access to their home and workplace. A further billion liras is expected to be invested by private-pubic partnership, in the pioneering three tier under sea tunnel.

This tunnel will relieve heavy traffic on both Bosphorus bridges, avoiding city centre traffic, which is infamous at rush hour. The tunnel will also be host to a major railway project, planned to replace the overloaded metrobus system, which carrie 3.5 million passengers per day - three times its design capacity.

Kagithane, like most of Istanbul, has pockets of old property stock, awaiting demolition. Hence new neighbourhoods with primarily modern secure residences, are preferred by families. Middle class Turkish families now see this as the ultimate milestone.

Kagithane was first developed by smaller family developers. The larger brand name developers of Istanbul have noticed this and joined in. Today, mega complexes surrounding the Hasdal junction or a metro station have cropped up.  Pera Property hosts a range of residences in this investment zone around the Hasdal junction

Kagithane is also developing as a Istanbul's answer to Silicon Valley. Former warehouses are being converted into largescale mixed use complexes. Big architectural firms like HOK have designed state of the art complexes, and universities.  Ayazaga campus of Istanbul Technical University already has a substantial campus in the region. With the metro already linking the region to the main business district, this portion of Kagithane is exceptionally popular with all business sizes, as well as being a residential district. 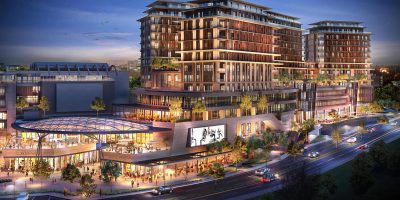