Launched amid much fanfare with David Hasslehoff himself partnering with his Knight Rider car, the project is firmly set to become a landmark in the investment hotspot of the “Media Highway” region. Expanding on the concept of state of the art technology, the developer has taken smart home systems to the next level, providing the owner with a fully digitized and “online” home in every aspect, from the heating system to the contents of your refrigerator, where ever you are in the world.

Aimed at the professional rental market, the project is an investor’s dream, with Universities, Hospitals, Turkey’s major TV networks, Europe’s largest convention centre – coupled with the government’s objective of converting the region into Istanbul’s second major commercial district (after Levent), an investment here is expected to give double digit annual gains, as well as rewarding rental income.

Made up of modern towers with glass facades, one residence tower, one office tower, with the third set to become a 5 star hotel should relevant licences be granted as expected. With two 5 star residences to the rear approaching completion and costing a minimum 50% more, pricing at this project has caused a gold rush amongst Turkish investors.

With such high end complexes in the region, and a direct access into a mall with 200 branded stores, boulevard front cafes and restaurants – this region will be a hot spot for local socialite middle class elites. With Turks wanting to move on from the old style concrete buildings, modern glass fronted buildings are hugely popular, with demand outstripping supply

Facilities on this complex

Base prices are in Turkish Lira and are automatically converted at the current exchange rate. Quoted prices are list prices and subject to discounts in accordance with the chosen payment plan, and negotiation with the seller. 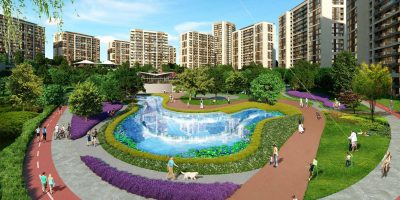