2019 Investment guide – where are Turks investing?

80% of real estate adverts for Istanbul targeted at foreigners are generally in the western suburbs of Beylikduzu and Esenyurt. These regions are generally cheap, and with a few exceptions, the average income is low. Secure complexes are beyond the local population, and hence are heavily advertised to foreigners with a significant mark up - usually 15-20%.

Without the proper guidance, unsuspecting foreigners are lead into a false sense of security - with grandiose promises of double digit returns and heavy government investment. The reality is these two districts average 5-6% price gains each year, and at best 3-4% rental income. This is low for Istanbul considering the weakness of the currency - once this is taken into account, an investor is at a loss. Government investment has been promised now for over ten years, but with public transport already creaking at the seams, nothing has happened.

Turks invest in central regions, in traditional areas of constant demand. This investment started with the government’s urban regeneration program. In 2004, the authorities began to put into place, strict construction guidelines. These allowed for older stock to be replaced with modern earthquake proof constructions. The first target was Bomonti in Sisli (about 8 mins from Taksim). A ghetto neighbourhood littered with aging warehouses and factory, Bomonti was ripe for regeneration. Today Bomonti is known as the home of posh upperclass residences, with expensive cafes and restaurants. The average price has hit $4500, with it expected to continue as space has now run out.

With Bomonti now at a peak Turks have turned their eyes to the neighbouring Golden horn region. Made up of Eyup, Kagithane, and Bayrampasa, these districts resemble Bomonti of 2004 - Old factories, warehouses, and ageing poorly built residential stock. With huge government expenditure on metro lines, road tunnels, and incentives for industry to leave the city, the average price has almost doubled in the last 3 years from $1000 per sqm to $2000 per sqm today. With low rental returns, investors here are taken advantage of below market off plan prices, seeking to resell just after completion. With two metro lines and a tramway currently under construction, as well as an express tunnel link to the major highways, government expenditure is in the billions of dollars. Within 5 years, this zone will be a desirable residential neighbourhood of Istanbul.

In the mid 90s, the government decided to build the M2 metro line through the prime parts of Beyoglu and Sisli - from Sishane, Taksim, up to Sisli and terminating in Levent. With the main business district of Sisli now at full capacity, the government needed to choose a new region to form a modern, high rise business zone. Torn between Levent and the Media highway, the government chose Levent, as a height restriction over the Media highway (due to the airport) made Levent more attractive. Levent in the mid 90s was a ghetto of poverty with factories and warehouses dominating the landscape. Today, Levent and the surrounding region has averaged at $10.000 per square metre, with the world famous Zorlu centre changing hands at up to $20.000 per square metre.

Levent is now at full capacity, with literally no room left for high rises or new roads to relieve peak hour traffic gridlock. The government has now turned its eyes to the media highway once again. With the airport expected to be taken out of service by 2023, media highway is now well advanced in its transformation from industrial to commercial centre of Istanbul. It is expected to exceed Levent, with its wide highway stretching from the Airport to the mall of Istanbul, and then on to the new airport in 2019. With two metro lines currently under construction, linking the region to the elite Atakoy marina district, as well as the current business district in Sisli - Levent, the zone is expected to outperform all regions of Istanbul, reaching $4000 per square metre within 3 years. Current average is $2500 per square metre on completed options, and under $2000 for off plan options. Investors can find completed options and expect an immediate return of 5-6% income, with 20-25% capital gain per annum based on the Turkish Lira. Whilst many agents boast gains of 40-45% per annum, these are unrealistic at best.

Most clients we talk to gasp at the prospect of investing in the Asian side - there is a misconception that the Asian side is inferior and poverty stricken. In reality, most Turks ideally want to live and work on the Asian side of Istanbul. Kadikoy and Uskudar are steeped in history as much as Sultanahmet, and average income is very high compared even to “central” Istanbul (like Sisli - Beyoglu etc).

In 2011, the government started a heavy investment program, which further enriched the lifestyle of residents. Two new metro lines, including the billion dollar under Bosphorus rail link to Sultanahmet, as well as the Eurasia tunnel (linking Kadikoy to Sultanahmet by road) were completed quite recently. These billion dollar investments attracted huge private investment, so much so, that the government took an entire neighbourhood and demolished it in one go. The Fikirtepe regeneration zone, as its called, is a plot of land over 8 square kilometres in size. With only residential compounds allowed, the region currently trades for $2500 per square metre on average. Upon completion in 2020, the region is expected to hit a minimum of $4000 per square metre.

Faced with dangerous old stock, this zone is in desperate need of modernisation. Despite being within 15 minutes of Taksim, Sisli, and Sultanahmet, the region has been plagued by extremely low quality construction. The region attracted low income families, due to its steep hills, and stench from the poorly maintained sewage and Halic River. The government stepped in, first bringing modern sewers and water cleansing in the 90s, and regular river dredging - Today the Halic is entering a new age, with plans to restore it to its former glory currently underway. 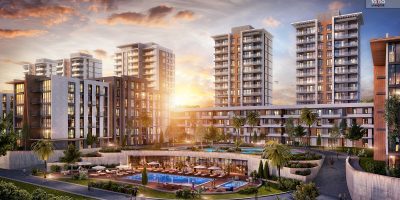 Invest in Istanbul’s most popular and sought after district