A Guide to Bomonti

Sisli – the heart of Istanbul. Home to world famous brands, historic landmarks, and the primary business district of Istanbul.

Around the 17th century, Sisli was home to mainly graveyards and not much settlement. In the 18th century, vineyards, barley fields and several gardens rose in the Sisli and Mecidiyeköy neighbourhoods. In 1854, the government built many modern buildings and homes in Şişli to become an area for upper managers and nouveau rich residents. Other buildings followed in the 19th century, with the construction of Feriköy and Bomonti breweries and the Children’s Hospital in 1898.

The Bomonti neighbourhood  of Sisli - Istanbul, takes its name from the Bomonti Brewery founded by the Swiss Bomonti Brothers in 1890. It’s located at the heart and the busiest part of Istanbul and one of the wealthiest and most sought after districts thanks to its luxury skyscrapers, and its special location next to the famous Nisantasi - the city’s most elite fashion and commercial district. It’s also home to world class 5 star hotels.

Bomonti was the first major brewery in Constantinople. The Swiss brothers set it up in the outlying Feriköy district of Constantinople in 1890 and moved it later in 1902 to the neighbourhood that was later named after the factory. The London Nectar based brewery company established a factory in Büyükdere in 1909, starting a fierce competition. By 1912, they merged under the name “Bomonti-Nectar Combined Beer Factories”. The young republican government was eager to nationalise all alcohol production and gave the Bomonti brother’s permission to continue their operation till 1934 when it changed its own stance and seized the company. Tekel then administered the factory under the name of Istanbul Tekel Beer Factory. Its building was abandoned in 1991. The refurbishment and conversion of the factory into a home for gourmet dining kicked of the urban regeneration of a region which had become unloved and rundown in the 1990s.

The government started an urban regeneration program in 2004. the authorities began to put into place strict construction guidelines. These allowed for older stock to be replaced with modern earthquake proof constructions. The first target was Bomonti. A ghetto neighbourhood littered with aging warehouses and factory, Bomonti was ripe for regeneration. Today, Bomonti is known as the home of posh upper-class residences, with expensive cafes and restaurants. The average price has hit $4500, with it expected to continue as land has now run out. With the government’s expenditure on metro lines, road tunnels, and incentives for industry to leave the city, the average price has almost doubled in the last 3 years from $1000 per m2 to $2000 per m2 today. With two metro lines and a tramway under construction, as well as an express tunnel link to the major highways Bomonti is now linked to all parts of the city.

The Dolmabahçe–Bomonti Tunnel is an independent twin-tube road tunnel linking the world famous Dolmabahçe in Beşiktaş and Bomonti. It was a part of the Istanbul Metropolitan Municipality project to  build seven tunnels for the “City of Seven Hills”, the nickname of Istanbul. With its inauguration in June 2010, demand for residential and commercial space in Bomonti boomed. The tunnel runs under Taksim and Feriköy, with a total length of 2.4km. The normal rush hour drive of 45 minutes is reduced to just 5 minutes.

The Hilton Bomonti is a five star hotel located directly beside the old Bomonti factory. Opening in 2014, its 34 floors enjoy exquisite views across the city of Istanbul, including the Bosphorous. With 829 rooms, it is the largest Hilton in Europe and of course the largest hotel of Turkey. The construction of such a major brand name into the heart of Bomonti, gave confidence to other world class brands to take their place in the area.

Nestled between Taksim and Sisli, Bomonti is an area that is now in huge demand from the Turkish middle and upper classes. Just 5-10 minutes away from Taksim Square, Besiktas, Kağıthane, and the E5, it’s also close to the city’s landmarks as it is just 5 minutes away from Dolmabahce Palace, 10 min away from Bosphorous bridge, 10 minutes away from the Golden horn, and 20 minutes away from Sultanahmet’s Blue Mosque and Hagia Sophia, without forgetting that it is already home to luxury skyscrapers, world-class hotels, international hospitals, and several private schools most notably the world famous French schools.

The Mimar Sinan Fine Arts University, the first high school of art and architecture in the country, took the name of the Academy of Fine Arts in 1928 and thus became the first higher education institution in Turkey that received the title of Academy. The Academy of Fine Arts gained scientific autonomy in 1969 and was transformed into a university under the name of Mimar Sinan University with Osman Hamdi Bey as a founding director.

Bomonti today is home to luxury skyscrapers, such as Anthill towers of 54 floors and 200 meters high, Bomonti Time Residence of 52 flours and 195 meters high, Arista Bomonti Business Centre of 26 flours and 102 meters high, in addition to Istanbul Hilton Hotel, 179 meters high, and many other residence and office towers that evolved Bomonti from factory ghetto, to the centre of commerce for Istanbul, and therefore Turkey. 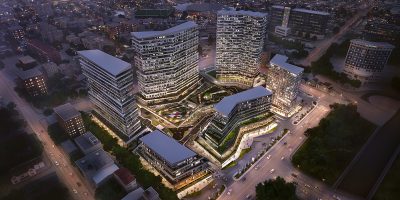