Istanbul palaces, which are one of the places you should definitely see in Istanbul, are always one of the favorites of the city with their history and experiences. These palaces reveal the past of the city, where the rulers of the Byzantine Empire, the Ottoman Empire and the Republic of Turkey lived and were the administrative centers of these states.

Built in the era of Mehmed the Conqueror in 1478, Topkapi Palace which was the administrative center of the state and the place where the sultans lived until Abdulmecid had the Dolmabahce Palace built. It covered an area of approximately 700.000 m² meter when it was first established, but today it covers an area of only 80.000 m². It was opened to the public in 1924 by the order of President Mustafa Kemal Ataturk and still serves as a museum. Included in the UNESCO World Heritage List in 1985, it is the most symbolic historical monument in the Historical Istanbul Peninsula.

The construction of Çırağan Palace, whose plan was made by Nikoğos Balyan, was completed in 1871. The palace, which is 750 meters long by the sea, is made of white marble. When Murat V was deposed, Çırağan Palace was given to him and his family as a resident upon his request. Valuable antiques, the private collection of Abdulhamid II and the library of Murad V were burnt down in the fire that broke out on the rooftop on 20 January 1910. In 1990, it was transformed to a 5-star hotel.

Dolmabahçe Palace, which was built in 1856 in the style of Western architecture, was used by six sultans, respectively, Abdulmecid, Abdulaziz, Murat V, Abdulhamid II, Mehmet V Resad, Mehmed VI Vahdettin, to manage state affairs. Then the last caliph Abdulmecid II lived here. Mustafa Kemal Ataturk lived here for a total of 4 years at interval until 1938 and died here on 10 November 1938. Today, Dolmabahçe Palace serves as a museum under the Directorate of National Palaces.

Yıldız Palace, which was built for Mihrişah Sultan, the mother of Selim III, was used as the main palace of the Ottoman Empire, especially during the reign of Abdulhamid II. He left Dolmacahçe Palace, which was the scene of two revolutions, and moved to Yıldız Palace. The palace became the political and administrative center of the state during this period. In 1882, the court that gave death sentences to Mithat Pasha and Mahmud Celaleddin Pasha was held here. After this event, Yıldız Palace gained a more negative meaning among the people.

Unlike other palaces, Beylerbeyi Palace, located on the Anatolian side of Istanbul, was built by the architects Sarkis and Agop Balyan in 1865. After the Balkan Wars, Abdulhamid II was taken from Villa Alatini and brought to Beylerbeyi Palace and spent the rest of his life here. Many foreign statesmen stayed here during their visit. A part of the large garden of the palace was given to the General Directorate of Highways and some to the Naval NCO School. Also, the construction of the Bosphorus Bridge damaged the integrity and originality of the palace. Today, it serves as a museum open to visitors 5 days a week.

It is estimated that the architect of the Malta Mansion, which was built by Sultan Abdulaziz in 1871, was the Italian architect Fosatti. It is thought that the mansion was named Malta Mansion because its stone came from Malta. Murad V stayed here for a while for security reasons when he wanted to be enthroned and was unsuccessful. In 1941, it was handed over to the Istanbul Metropolitan Municipality by the Ministry of Finance. Built in Neo-Baroque style, the Malta Mansion underwent a renovation in 1979 planned in accordance with its original form.

Tekfur Palace, which is the only palace remaining from the Byzantine period, has been used by Byzantines since the 12th century and continued its existence for a long time. It is not known exactly when and whom the palace was built. Tekfur Palace, which was among the priority targets in the conquest of Istanbul, was the first imperial building to be taken by detachments that entered the city during the conquest. At the beginning of the Tulip period, a tile workshop was established in the courtyard of the palace. After a short time, this factory was closed. Now it serves as the Ottoman Tile Museum.

Florya Atatürk Mansion was built by architect Seyfi Arıkan due to Mustafa Kemal Atatürk’s special interest in the region. The mansion is built on piles rose on the seabed 70 meters from the land and is connected to the land by a wooden pier. It was originally built as a grove. This groove is called Florya Atatürk Forest today. In addition, the mansion is one of the most important symbolic works of Early Republican Architecture. After Atatürk, it was used as a summer mansion by the presidents until 1988. In 1988, it came under the management of the National Palaces Department and was repaired, then turned into a museum.

Adile Sultan Palace was built by Sarkis Balyan in 1856 for Sultan Abdulmecid’s sister Adile Sultan. After the death of Adile Sultan, who was the only female poet to have a divan in the Ottoman Dynasty, in 1916, it was decided to turn it into Turkey’s first boarding school for girls. It was damaged in a fire on 7 March 1986. Then it was restored with the donation of Sakıp Sabancı and the efforts of former graduates. Today, it organizes weddings, graduations, gala dinners, meetings, seminars, conferences, lunches and dinners. 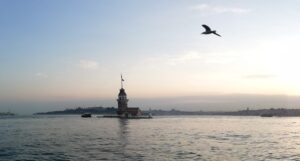 How buyers pay for property in Turkey has changed. Find out the new laws that protect buyers for the better.

Taxes in Turkey can be confusing but are actually similar to most capitalist economies. Here is a detailed breakdown of taxes in Turkey.

Family compound at the peak of Cengelkoy Uskudar