The Media Highway commercial district has dominated the real estate news sector of late, but what is this district?

Map of the Media highway zone, showing the key institutions, with the under construction metro lines indicated in green

The Media Highway, as shown in the Map above, is the highway that links Ataturk Airport, the E5 highway, and the E6 highway to the North (near Mall of Istanbul). Its importance in Istanbul goes back many decades, with the government choosing the current business district in Levent, over the Media Highway. This was due to height restrictions from the Airport, of course.

With a new airport opening in 2018, what will be the largest in the world by a huge margin, Ataturk Airport is due to close. Businessmen are already jostling for position, due to its prime real estate location.  This closure of the airport, combined with the current business district overwhelmed - and having literally no space left - Media Highway's conversion into Istanbul's premier business district started ten years ago. Mall of Istanbul is one of the major investments that kicked it off.

Factories which used to line the highway have all closed and moved into Basaksehir (just north of Mall of Istanbul). In their place, tall complexes are cropping up - both commercial and residential.

Private investment in the region runs into the billions, but the government has also supported this with infrastructure investment. Revival of a Canal that runs from elite Atakoy, all the way to the Mall of Istanbul in the north. Due to open in 2018, offering a private water taxi service, and other romantic trips!

Every city has hotel districts and Istanbul is no different. SIx 5-star hotels, all major chain brands, are in the region, with several boutique hotels. The region is also home to the large exhibition centre in Europe - CNR expo, and the World Trade Centre. Not forgetting of course, one of the world's busiest airports. When the new airport opens, the region will maintain its importance from the perspective of airport staff - Media Highway provides the fastest route into the new and the old airport. The airport's new high speed rail line will also connect to the region, and the existing high speed rail construction.

Universities are also in the region, with three major universities serving residents. Major private hospitals have also moved into the region, especially around the Atakent district. Atakent is also home to several private schools and colleges.

The region's most advanced neighbourhood is Atakent, with several mega projects completing several years ago, totalling over 5 million square metres in land. Prices are at a peak here and hence investment opportunities have passed in this neighbourhood. Neighbourhoods that are just now establishing, is where an investor can make a serious premium.

The Mahmutbey region is well advanced in its conversion from factory neighbourhood, to plush wealthy residential complexes. Several compounds have recently completed. Already served by several malls and office blocks, it's also the closest to where two major metro lines link, making it a very popular choice with Turkish investors.

An investor can make a decent return here by buying off plan with aggressive negotiation.

Yenibosna is also prime for investment, with several well established compounds surrounded by excellent infrastructure, and family friendly amenities (hospitals, schools etc). Several projects here are approaching completion, and due to its close proximity to the airport, are well chosen to target the heavy rental market in the region.

Whilst parts of Istanbul like Sisli, Besiktas, and Sariyer, will always serve an investor well, prices are well over $4,000 per square metre for anything decent. Parts of prime Sisli, like Levent, trade for over $10,000 per square metre. This shows the potential of Media Highway going forward. It is the only district where the government can comfortably establish a major business district to compete with Levent and Atasehir (on the Asian Side). Yet prices remain competitive, offering excellent potential for future growth.

Media highway is a prime investment hotspot - view all of our Media Highway options on this page. 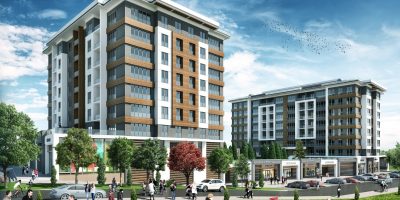