As most people familiar with Istanbul will know, the region is prone to regular and heavy earthquakes. The last heavy earthquake in 1999 was a serious wake up call to authorities of impending disaster in Istanbul.

Istanbul's rapid expansion in the 80s and 90s, bought with it unregulated and high density construction. Heavy immigration of Anatolian towns resulted in exceptionally high demand for housing. Unfortunately much of this housing was built too fast and not to earthquake standard.

As a result, Turkey enacted a new construction law in 2004. This bought in strict modern standards, not just for earthquake proofing, but for standards across the board of construction. Since 2004, Istanbul has seen exceptional modernisation in building standards. Despite 17 years of ongoing renewal, there is still much to do.

Ask any local for an example of this renewal and Bomonti comes to mind. Bomonti, a small neighbourhood in the city centre district of Sisli, is the poster boy of renewal. Suffering as a ghetto in the 80s and 90s, two major road tunnels in the 00s combined with the new laws, saw major developers move in.

The old Bomonti factory was rapidly renewed, Mimar Sinan University built a major campus, and huge skyscrapers cropped up almost overnight. Hotels like Fraser place, Hilton (the largest in Europe), and Divan moved in with 5 star quality. Smaller compounds, known as residences or serviced apartments, were built, and posh cafes and restaurants piled in on the demographic shift.

The demographics of the region changed within the space of a few years from ghetto, to middle class hipster. The old fashion and textile factories were converted into posh residences, and factories have been replaced by posh custom made clothing stores.

On the flip side, ask a local to name a negative example and almost all will point to Fikirtepe. Fikirtepe was, and mostly still is, a region suffering from incredibly poor housing stock. Here, the government decided to replace these en masse. Unlike Bomonti, there were no large parcels like factories which could be replaced by skyscrapers.

Instead, the local authority allowed developers to come to agreements with small apartment and housing owners. Small parcels of land with 4-5 storey apartment buildings, were combined together - to form larger plots of 20,000 sqm plus parcels of land. These were then permitted to reach for the sky! 20-30 storey residential compounds moved in, and within the space of 5 years, over 30 towers have filled the sky.

Unfortunately, poor planning, disagreements between original owners and developers, and a lack of social amenities, saw poor sales. This has resulted in a region which lacked a real family feel - families stayed away, and only a small proportion of large apartments are occupied. However, with new housing supply drastically falling in 2020, Fikirtepe has seen record breaking sales across the spectrum. It looks like a happy ending is on the horizon for the region.

Urban regeneration in Istanbul offers investors an opportunity to make serious capital gains. Usually, renewal is combined with infrastructure projects - a new hospital, university, or - most importantly - a new metro line. Where this type of renewal happens in a region that lacks modern housing supply, prices of new property tends to boom. Even in Fikirtepe, where the renewal was applied without proper planning, prices have boomed - in 2020 supply just could not keep up with heavy demand from locals.

2021 will see this trend continue. Renewal is now managed a lot better, and are happening in a more manageable fashion. Height limits are now being applied to avoid a market being over flooded with new housing stock. Local amenities are managed better to ensure services can keep up with incoming demand from new residents.

A smart investor in Istanbul will follow the investment of the central and local government. Most crucial amongst this in 2021 will be transport infrastructure.

Home owners living in outdated apartments are offered several incentives. The government provides rental support for these owners for a period of 12 months. In addition, where planning does not permit enough new apartments on the parcel undergoing renewal, the government makes a contribution to the cost of the renewal.

In the majority of renewal, a further 50-60% of apartments are created. These apartments that are sold to new residents are given additional incentives - property tax is reduced to zero (from 4%), and where VAT would be 18%, this is reduced to 1%.

Renewal will continue at a rapid pace in Istanbul going forward. Especially since an earthquake is overdue in the city. In addition, there is a heavy demand from locals for new, modern, and safe apartments. Older stock is shunned these days for stock that was built post 2004. This has resulted in a massive supply issue, particularly in regions with heavy demand - traditional city centre distrcits, such as Kadikoy, Uskudar, Sisli, Besiktas, Bakirkoy, and Zeytinburnu. 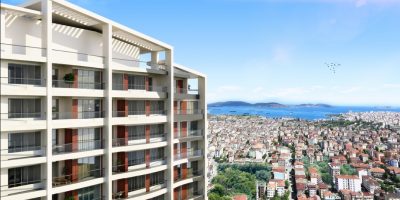 Family apartments in Kartal with incredible sea and island views