Getting lost in the streets of Istanbul is one of the most enjoyable activities to do in the city, not only thanks to its historical monuments that have survived different civilizations - but also thanks to dozens of old apartments, passages, and all the gorgeous architecture that makes you think "I wish I lived here." We have compiled five historical apartments for you, and each of them has a more engaging story than the other!

One of the wealthiest statesmen of the reign of Abdulhamid (1876) was Sarica Ragip Pasha of Euboe. This pasha had three of the Beyoğlu passages, namely the Anatolian Passage, the African Passage, and the Rumeli Passage, as well as this apartment building on İstiklal Street. Commission in the early 1900s, this five-story historical apartment is in the Art-Nouveau style. Aram Karakaş, the architect, thought of something that added mobility to Ragıp Paşa's Apartment: the windows on each floor of the building are different, and they all have fascinating geometric decorations!

The Egyptian influence is heavy in all parts of Istanbul. The Egyptian influence is extraordinary in this famous apartment in Galatasaray from an artistic view. Built between 1905-1910 and designed by architect Hovsep Aznavuryan, the Egyptian Apartment was built by Abbas Halim Pasha who was the brother of Grand Vizier Sait Halim Pasha. II. It was also the stage for Turkey’s big names, providing a home to Abdülhamit and Atatürk's dentist Sami Günzberg's. It was also where Mehmet Akif Ersoy lived and died. Today it is still a  magnificent building, standing out proudly in Beyoglu. The terrace provides a bucket list of 360 panoramic views of Istanbul.

Dogan Apartments is located on Serdar Ekrem Street, which is an exceptionally popular street in Sishane. The apartment was built for the Belgian merchant and banker Albert Helbig between 1892-1894 by architect Raymondo d'Aranco. With its 52 flats, its pompous courtyard and the terrace floor with Istanbul at one’s feet, Dogan Apartment is named after the son of Kazim Tashkent, the owner of the building since 1942. Tourists pass through the street mouth agape, as they take in the grandeur of this delightful building.

Camondo Apartment; tells the unfortunate story of the Camondo Family, a Sephardic family who built many magnificent buildings in Istanbul. Their legacy remains functional till today and serves the residents - such as the extravagant Camondo Stairs. All the members of the family left Istanbul in the fall of the Ottoman Empire and settled in Paris. After that, they were sent to Auschwitz during World War II. Although the date and the architect who built Camondo Apartment are not known precisely, there is two important information about it. One, It is where architect Gabriel Tedeschi, the sultan's dentist Hantz Von Der Heyde and artist Abidin Dino lived; The second is that the famous Stairs were built to allow Avram Kamondo to leave the building and go to the bank building on Vojvoda Street.

While many of the old apartment buildings in Beyoğlu have been transformed into hotels, the transformation of the Hıdivyal Palas has been reversed. Hıdivyal Palas opened its doors in 1841 as one of the most luxurious hotels in Istanbul under the name of Hotel d'Angleterre. In 1895, it changed hands and took names such as Egypt Hotel and Hıdiv Hotel. This building was famous for its famous guests like Pierre Loti and many other stars of the time. Its French restaurant has historical books on two to three languages, and old wine and dishes. Today it is home to Lebon Pastanesi and Armada Restaurant (one of the decreasing number of artisan restaurants in Beyoğlu). To get an idea of ​​the top view of the building, you can visit the Light Blueprint on the upper floors!

Inspired by “ISTANBUL FLANEUR - The magger “ 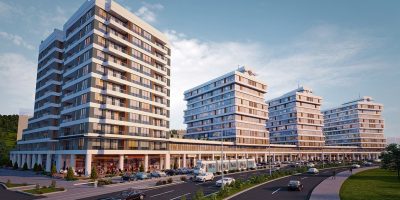