The legend of Hezarfen

Hezarfen Ahmed Celebi  was an Ottoman aviator, scientist, and inventor from Constantinople (present-day Istanbul), He is one of the first people to fly in history. Hezarfen achieved an unpowered flight with bird-like wings attached to his body between 1623 and 1640. Information regarding his legendary flight was limited in the writings of  Evlia Celebi's book "Seyahatname".

Born in 1609 in Istanbul, he was commonly referred to as "Hazerfen", derived from the Farsi word that means “the man with a thousand science" or "The man who knows a lot”. He realized his flying project during the reign of Sultan Murad IV.

Hezarfen  made many experiments and research in various subjects before creating his wings. He took inspiration from another Turkish scientist, Ismail Cevheri, and developed his theories further. In 1632, he made nine successful flights but they were all short. After that, he trained in Istanbul near modern day Okmeydani, to measure the durability level of the wings which he prepared by examining birds flying. One day later and in front of the eyes of the Sultan and Istanbul's society that gathered at the shores, he jumped from Galata Tower, 66 metres in height and 61 metres above sea level, crossed the Bosphorus to the Anatolian side and landed more than 3 km away. This surpassed Abbas Ibn Firnas who flew a short distance before him in Spain but couldn’t land safely.

Like any other pilot in a flying wing, Celebi calculated the wind's speed and direction which made him create a great impact in the Ottoman Empire and Europe. Sultan Murad IV watched his flight from Sinan Pasa Mansion in Sarayburnu, and amazed at the achievement, gave Hezarfen a pouch full of gold. However, he changed his mind about the existence of such a well-informed and talented scientist later when he exiled him to Algeria by saying “This man is to be afraid of, he is capable of doing whatever he wishes to, his survival can’t be allowed.”

Hezarfan lived his final days in Algeria where he died in 1640.

It is hard to believe that Ahmed Celebi could fly such a large using the technology at the time, but when analysed under the light of today's science it could be possible using a simple glider that rises with the air stream like today’s gliders. Whether the story is true or not, Hezarfen clearly made a huge impact on Ottoman society at the time, and his legend lives on in Turkish society today. His name lives on in many aspects of Turkish life, most notably as Istanbul’s third airport in the small town of Catalca. 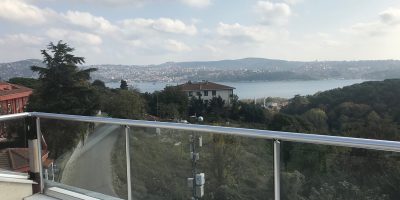 Villa in Yenikoy-Istanbul with Bosphorous views